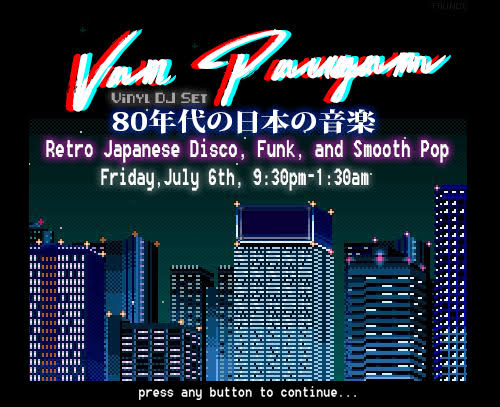 In 1980s Japan, a particular genre of music sprang from the financial boom that drew influence from many styles including Rock, Jazz, Pop, and Disco. The genre was ?City Pop?, named as such mainly due to the fact that it was mostly only heard in big cities. The thriving economic ?miracle? that propelled Japan into the global stage as a top contender in technology, science, and business also resulted in prosperous cosmopolitan lifestyles with music artists creating the City Pop sound to match the mood. With the advent of advanced car stereos, it became typical to hear City Pop while driving through urban landscapes and sprawling highways encircling metropolitan areas. Now that Japanese music is becoming more appreciated globally, City Pop is once again being heard, but this time mainly by listeners outside of the country.

City Pop can evoke a strange sense of familiarity as its varied characteristics borrowed from other genres can seem as if remembering a distant memory too obscured to make out completely in your mind, though still comforting enough to keep you hooked from beginning to end. City Pop has been described by many as incredibly nostalgic, even by those too young to even remember the era in which it flourished. The imagery and themes used often reflect the social paradigm of the times; excitement for the future, romance and heartbreak, optimism and an overwhelming urge to enjoy life.? Overall, the genre presents a time capsule into the collective psyche of those who benefited the most from the economic bubble by reflecting the care-free, breezy perceptions of a newly cosmopolitan generation of savvy business people, socialites, and lovers of luxury.

Like all dreams, Japan?s economic bubble of the 80s soon popped going into the 90s, resulting in the country?s commercialistic paradise being perceived with sharp disdain as much less euphoric times loomed on the horizon. City Pop records, and all their fantastical neon hopes and dreams were nothing more than a remnant of a time many no longer remembered, and most would rather forget as evidence of a country?s collective recklessness and disillusionment. The genre had long been relegated to the dust-bin of Japanese cultural importance, and practically dead but to those who kept the records alive.

Thanks to the internet, the genre eventually found a new home online in the mid-2010s, and is once again being shared and appreciated for it?s finely crafted melodies, soaring arrangements, and evocative imagery of hopeless romanticism, innocent joviality, and promises of a bright future. While many view the genre as a fun throw-back to simpler times, it still serves as a sobering reminder of a brilliantly colored world built on wishes that would go forever unfulfilled.

Click here for More Information on the upcoming event!

Listen to the City Pop Live-Stream

About the author: Van Paugam is a Miami Beach native based in Chicago that specializes in 70s and 80s Japanese music. Maintaining an extensive library of vinyl from Japan, he curates a YouTube channel dedicated to City Pop and associated imagery that has gone on to attract over 50k subscribers that have come to love retro Japanese funk, disco, jazz, and pop.

More from our blog